Why It Is Beneficial To Use Timing Belts And Pulleys

Why It Is Beneficial To Use Timing Belts And Pulleys

Timing belts and pulleys are used widely in automobiles and therefore they are regarded as extremely important tools. They are an integral part of the internal combustion engine used in a car and its various applications. Timing belts and pulleys help to control the opening and the closing of engine valves. These tools also help to connect the car’s crankshaft to camshaft and then synchronize them to achieve the correct timing when you want to keep the vehicle’s engine system running. The timing belts and pulleys work together to provide positive drive by simply engaging molded teeth in belt to the grooves on pulley that are accurately spaced. The entering and exiting of belt teeth from pulley grooves helps to produce the positive drive, thus leading to quieter and smoother engine operation.

A timing pulley manufacturer in India can design and develop cutting edge units that can work well with the latest automobiles. The latest timing belts and pulleys offered numerous distinct advantages over the models that have been existent since the 1970s. While the models that were used in earlier car engines did offer a wide range of benefits of their own, they still had many limitations for which they had to be replaced in due to course of time. Over the last decade or so, the use of timing belts and pulleys has gone through a major revival. Numerous new models of timing belt and pulleys have been introduced in the recent times that have enhanced the operational efficiency of the vehicles.

There are a number of advantages that are provided by the contemporary timing belts and pulleys, which is why they are strongly recommended by the timing belt manufacturers in India. Firstly, they offer precise timing and registration without any loss of ability to manage high torque. They also ensure a high level of mechanical efficiency which goes as high as about 98% compared to the range of 91% to 98% efficiency that is offered by the chains. Moreover, the timing belts and pulleys can also minimize the risk associated with slippage by ensuring effective grip of the belt on the pulley. Wearing and tearing of the timing belt pulleys and belts cannot cause any elongation or ruining as they are mostly made from high tensile rubber materials. It is factors such as these that lead to their enhanced efficiency at each and every step of the way. 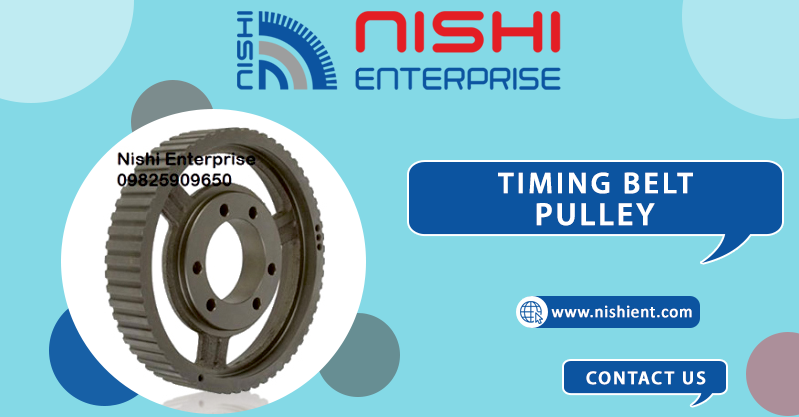